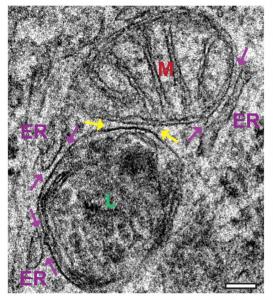 This electron microscopy image from the study shows an inter-organelle membrane contact site (identified with yellow arrows) forming between a mitochondrion (M) and lysosome (L), which simultaneously also contacts the endoplasmic reticulum (ER). 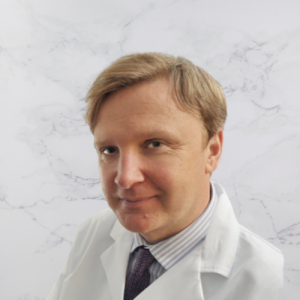 Dimitri Krainc, MD, PhD, the Aaron Montgomery Ward Professor and chair of The Ken and Ruth Davee Department of Neurology, was the lead author of the study, published in Nature. 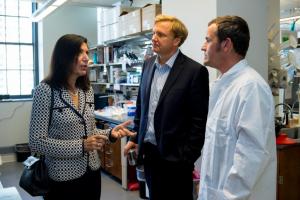 For the first time, Northwestern Medicine scientists have discovered that two key cellular structures, mitochondria and lysosomes, come into direct contact with each other to regulate their respective functions. The findings were published in the journal Nature.

“In some ways, we assume that scientists have discovered all the major inner workings of our cells in the 21st century. And yet in this work, we made a new observation that these two organelles are directly talking to each other,” said principal investigator Dimitri Krainc, MD, PhD, the Aaron Montgomery Ward Professor and chair of The Ken and Ruth Davee Department of Neurology. “It’s a surprising finding that provides new insights into normal cell function and will likely have implications for a number of diseases across the board.”

Mitochondria and lysosomes are critical to every cell in the body, where they play distinct roles: mitochondria produce energy for the cell, while lysosomes recycle waste material. Dysfunction of these organelles has been implicated in many diseases, including neurodegenerative disorders and cancer.
Dimitri Krainc’s laboratory had previously identified a functional link between mitochondrial and lysosomal dysfunction in Parkinson’s disease, in findings published in Science. This study, however, is the first to identify direct physical contact between the two organelles.

By using video microscopy with fluorescent tagging of the two organelles, the scientists observed that the mitochondria and lysosomes formed stable contacts inside living human cells. The authors also employed other advanced imaging techniques — including electron microscopy and super-resolution imaging — to discover that the formation, and subsequent loosening, of these contacts, is regulated by a lysosomal protein called RAB7.

“The discovery of these mitochondria-lysosome contacts is extremely exciting,” said first author Yvette Wong, PhD, a postdoctoral fellow in Krainc’s laboratory. “We now show that these contacts offer a potential site through which mitochondria and lysosomes can crosstalk, and it suggests that defects in the regulation of this contact site may drive the pathogenesis of various human diseases.”

In follow-up studies, the scientists are now investigating how dysfunction of the proteins that tether mitochondria and lysosomes together may affect the function of the organelles, as mutations in some of these proteins have already been implicated in neurological diseases.

“It’s very important that we now know that these organelles are talking to each other directly. How exactly these contacts are disrupted in various diseases, including Parkinson’s, and how to restore them therapeutically, will be the subject of in-depth investigations in the future,” said Dimitri Krainc, also director of the Center for Neurogenetics, a professor of Neurological Surgery and Physiology at Feinberg, and a professor of Neurobiology at the Weinberg College of Arts and Sciences.

Daniel Ysselstein, PhD, a postdoctoral fellow in Krainc’s laboratory, was also a co-author of the paper. 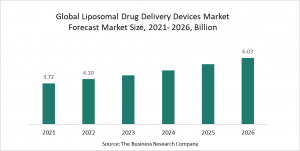 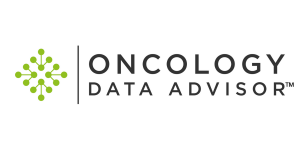